Autologous cell therapy refers to the prevention or treatment of human disease by the administration of a person’s own cells that have been selected, multiplied and formulated for delivery outside the body. We believe that our technology has the potential to restore kidney function by using a patient’s own selected renal cells (SRCs) to restore natural healing processes.

Our kidney restoration process begins when a small biopsy of the diseased kidney is sent to our laboratory. We are able to identify the patient’s own healthy progenitor cells and formulate them into a personalized product that can be re-injected into the damaged kidney for repair and restoration of function.

Based on preclinical studies, when the manufactured REACT product candidate is injected into the diseased kidney, the progenitor cells it comprises rapidly distribute throughout the kidney and integrate into the damaged nephrons and interstitium. To date, clinical studies suggest that treatment with REACT in patients with type 2 diabetes and CKD can positively impact renal function by stabilizing eGFR or attenuating the rate of eGFR decline. Other improvements observed with REACT treatment include stabilization and/or reduction in UACR, increased kidney cortical thickness, and improved hemoglobin levels, suggestive of a reduced risk of anemia.

REACT, an autologous homologous cell admixture, is made from expanded autologous SRCs, obtained from each individual subject’s kidney biopsy. To manufacture REACT, biopsy tissue from each enrolled subject will be sent to ProKidney, in whose facilities renal cells will be expanded and SRCs selected. SRCs are then formulated into the cryopreserved or gelatin-based hydrogel product at a concentration of 100 x 106 cells/mL, and shipped to the clinical site. 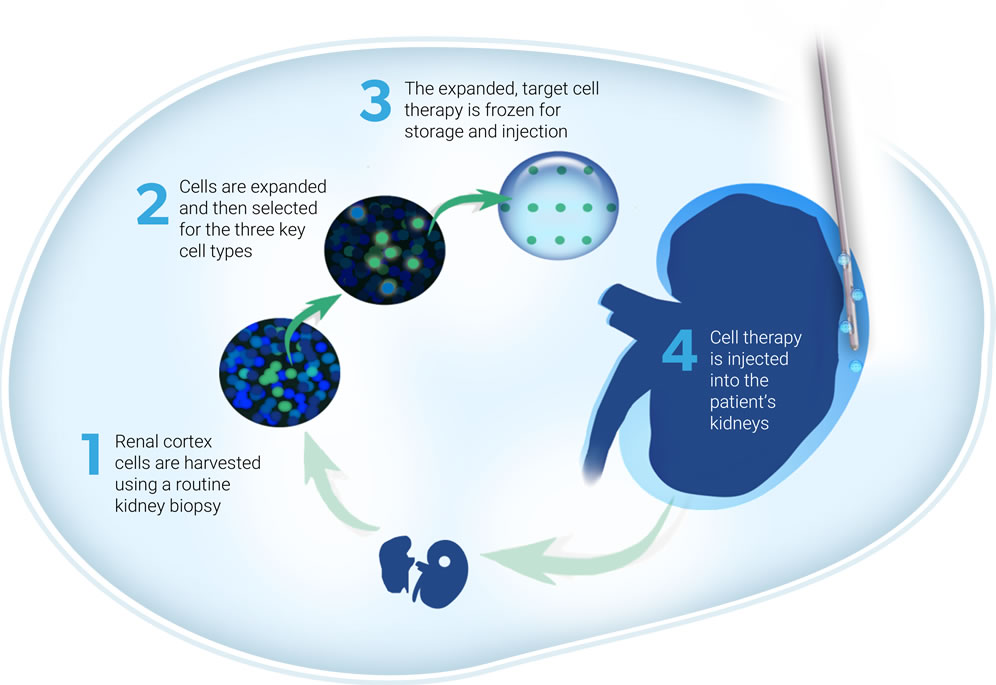 REACT is currently in a Phase 3 development program, as well as ongoing Phase 2 clinical trials, for the treatment of moderate to severe diabetic kidney disease and a Phase 1 clinical trial for REACT in patients with CAKUT. These trials are being or will be conducted at over 150 clinical sites throughout the United States, Europe, Asia and Latin America.

REACT has been well tolerated in clinical trials to date involving patients with moderate to severe diabetic kidney disease. For example, in the RMCL-002 Phase 2 clinical trial, the interim analysis as of September 2021 demonstrates there is a statistically significant improvement in a measurement of kidney function, referred to as eGFR, between treatment arms in the trial, measured at six months after the second injection of REACT (p-value=0.032), nine months after the second injection of REACT (p-value=0.018), and 12 months after the second injection of REACT (p-value=0.019). The procedure appeared to be well tolerated, consistent with renal biopsy. Adverse events reported are generally associated with co-morbidities of Type 2 diabetes. The ongoing clinical development program utilizes a newly developed percutaneous injection method into the kidney that is conducted using conscious sedation in an outpatient same-day procedure.